Motivation theory has been endlessly studied since the dawn of production systems in the early twentieth century.  There is one model that I use a lot though having not worked for a Premier League football team, am not sure if this would work there.

If an individual or team are not motivated and you lead / manage them, consider if one of the following, is missing:

Skill variety:  Individuals are motivated when they use their skills.  If you are trained, currently training, or have been trained, in a particular skill area, and do not get the opportunity to apply these new skills, then this will act as a potential de-motivator.  The issue we have in this large complex organisational setting, is whether we know all the skills and capabilities of individuals?  I was at a company where the person had spent over twenty years there.  Within that time, he must have taken countless courses and developed his skill set to no end, but where has this knowledge been captured and made available to others?  Now more individuals are placing information on Linkedin, but is the natural one place stop for the capture and dissemination of this information.  It boils down to this: if we do not know, how can we utilize the skill? 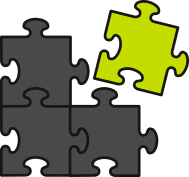 Task identity: What is the visible outcome and can they link what they are doing to the bigger picture?  If you take a one thousand piece jigsaw set, and I give you a single piece and ask you what the big picture is, you will find it impossible to guess. The same applies to our work.  We need to know how our work contributes to the bigger overall picture of what we are all working together on as a team.  I worked with a project manager installing a large processing facility for the chemicals industry. Parts of the design work were done by teams located across the world far away from the actual physical installation.  So after we spoke about motivating the team, he started putting pictures of the plant as it was being assembled so that the design team could feel, in some small way, part of the overall project.

Task significance: Impact on others.  How does our work impact our stakeholders?  We often see our work through lenses but do not take the time to view it from the perspective of the user, the person who interacts and utilizes the product or service.  I have worked with a number of leaders within the National Health Service (NHS) in the UK.  I was told a story of a unit that worked with children diagnosed with cancer.  The team was shaped by a lot of team infighting, and the leader became fed up and at a team meeting put a video on of a child suffering, which led to hush silence in the room and inevitable tears.  That event made the team realize the significance of what they were doing, and why they could not afford to not operate as a team.

Autonomy: The freedom to plan and undertake the task and avoid being micro-managed.  Smart people want macro-management not micro-management.  As a manager give the parameters of a delegated task: the resources, time constraints, the definition of success etc.  Then let the individual get on with it.  They may not take the route you would naturally take, but perhaps you can allow this so that they learn by doing. Smart people want smart management! See the work of Dan Pink on this.

Feedback: Clear information is provided on the task performance.  We all love feedback,

but what do we mean by it?  Often feedback is often inferred as being either + positive or – negative.  There is no such thing.  Feedback is what feedback is – an opportunity to learn or improve – that’s it.  So we should be able to take both + and – feedback and not infer this in a binary mode and actually view it as a way of continuous improvement.  But to provide feedback, and actually make it useful, we need to make sure that there is another layer in existence before we offer feedback.  Trust.  If there is no trust between the individuals then they recipient will not take the feedback in its true sense.

I have used this model across organisations and it helps to identify root cause issues of dem-motivated individuals and teams.